The Story of Smokey's Wisp

Smokey came to me by no accident. I am certain that he needed me as much as needed him. I got a call one day from a friend who told me of a barrel racing horse that bucked off his 13 year old rider and how he was being given away free and they were about to put him on Craig's List.

Here is the thing about giving away a solid specialty trained horse on Craig's List. If you give a horse away, for free, somebody will either take him who has no business owning a horse and put their child on them, then their child, who does not know how to ride, will do something terribly incorrect, resulting in said child falling off of the horse. Subsequently, the parents will be pissed and re-give the horse away, this will continue to happen until either someone knowledgable gets the horse and figures out that he is an amazing well trained horse, or, the more common scenario, the horse ends up in the slaughter. If the horse is lucky, a horse person will ride the horse and realize that he is worth much more than his weight in meat and put him on a site to earn bail money to get him out of "jail" slaughter. If the horse is not lucky, he will end up being hauled across a border and used for human consumption. Yep, you heard that right, people eat horse meat in Canada and Mexico.

Anyways, I contacted the father and learned that they had just purchased him 5 months prior as a barrel horse from a lady named Madison, who also barrel raced him. His 13 year old daughter was taking to barrel racing lessons, and during a lesson as the girl walked through the barrel pattern, Smokey erupted and bucked the girl off. The father said no more riding that horse, he is going up for sale. But in good faith, the father had a vet come out to do a lameness exam, Smokey had an elevated hate blood cell count which indicates inflammation or infection. So they treated him and listed him for sale. Another young rider, about 13 as well, came out to test ride him. She rode him in the arena at a walk, trot, and lope with no problems. They brought the barrels out and as she trotted him around the barrel pattern, he once again, erupted and bucked her off. As a result, the owner of thee barn became concerned about liability and informed the father that nobody was authorized to ride this horse on her property. Which put the father in a situation where he felt obligated to give the horse away, which he had paid a large chunk for. (I later located a YouTube Video of him for sale for $8,000) Smokey if sully registered, gorgeous and really about as well trained and polite on the ground as a horse can be. I went to retrieve Smokey that Thursday. As soon as I handled him, I could tell he and I would get along just fine. I asked the father if they wanted updates, and he said "not really".

I brought him home and got him settled in the second pasture. Jeremy and I were going camping in Bandera, Texas the next day, and we really wanted to take him,, Ordinarily, we would let a horse get accommodated, but he seemed to have a level head, so we decided that he was going to spend the weekend on the trails with us.

Jeremy was adamant that he ride him first, of course I was concerned that Smokey would erupt and Jeremy would get injured, but he is a tough guy and can make his own choices. 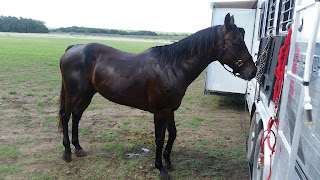 Jeremy Saddled him up and we were off. He rode him the entire weekend without one problem. In fact, Jeremy trusted that horse enough to gallop him across that open field right behind him in the above photo, after only 30 minutes of riding him. 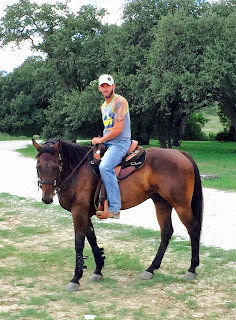 After our camping trip, I rode him several times, in the arena, on the trail, at the Tejas Rodeo. I played around barrel racing him and with no issue. I could tell that once he hit the second barrel, he was ready to bolt. By bolt, I mean go full speed to the third barrel and fly home. He had no desire to be held back. He seemed to chomp down on the bit and not care what his rider was asking of him. Other than that, this horse is hands down, the best horse I have ever sat on. One day I was out playing in the arena with him,  I was taking him around the barrels and I could sense he was getting agitated.

Sidenote: It is interested how as a rider, you can tell what kind of rider had him before by the way he behaves and responds to various situations. I could tell that his previous rider (Madison, not the girl because she didn't have him long enough) was probably high-strung, like any 20 something year old barrel racer, she rode him in a very antsy and impatient manner, just like most barrel racers do. The tend to do a lot of yanking on their mouths/heads.  Smokey was very uptight and nervous. He spooked easily, but never badly.  What I mean is, if I did something fast and unexpected, he would jump, but he would not take off running and try to get as far away as possible. The white in his eyes would show and it was clear that he was a nervous horse. As for being in his mouth, Smokey was constantly tossing his head, trying to find relief from the pressure of the bit. These things can all be easily fixed with the right mentality, and the right rider.  I could sense his agitation and tried to rein him in, but instead, he bolted, He ran to the rail of the arena, leaped over a trot poll and began bucking with all four in the air. I naturally sustained my grip for two or three bucks, but I knew I was coming off. I landed on my knees, which was pretty darn painful, but better than broken bones. I calmly approached him after I dusted my face off, and got right back on. I rode him around the arena at all gaits for the next hour. I had to understand why he did this and he needed to understand that his actions were not acceptable.  We have had him for about 3 months now, and I can tell when he is trying to "get away" from me. When he does this, it is normally at a lope, so I bring him in a small 10-15 meter circle at a lope and make him get back in frame. Since this incident, he has been grounded from barrels, he is only allowed to do arena work, drill team work, figure eight patterns around the barrels and trial rides. We want to reset his thinking on the barrels. Basically, he is on vacation. We are also very calm around him, always extremely patient, but this does not mean he gets away with things, it just means that we are not antsy, nervous, or in hurry to make him understand something. We also removed the twisted wire snaffle/rawhide noseband combo and put a hackamore on him. He is much happier, and equally responsive in the arena. He gets a dog-bone snaffle on the trail when there are several horses and we need more of a stop on him, otherwise he gets to be comfortable.  Since the day that Smokey bucked me off, and I realized how I could have prevented it by recognizing signs in his behavior, I have implemented some changes. As a result, I have seen tremendous changes in his behavior, and in mine! Everyday that I work with Smokey, if I go in there with too much on my mind, and don't focus on the the now, and being there with him, in the moment, he tells me with a nervous look or a swift side step- where he appears scared or uneasy. I am then reminded to clear my mind of the days worries, pay attention to what I am doing right that second and enjoy that time. This now applies to my interactions with my other horses, I move slower and just enjoy the time I am there with them, such amazing creatures. I pay more attention to their movements, and behaviors, and less attention to outside distraction. I now practice leaving all of my troubles and worries at the pasture entrance. I need a sign that says something like that on the gate! But even now, I see my interactions with people have changed, because of what Smokey has taught. me. I a calmer and more patient. I have more tolerance in traffic or long lines, and din't get irritated or disgruntled easily. I also try to focus on the good things that are working for me, and leave the negative somewhere else, preferably never to be found again :-)